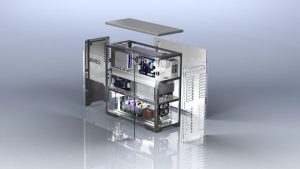 What is  a Solar Battery?

A solar battery is a battery designed specifically to store electricity produced by solar panels and to make that power available for later use.

In addition, solar batteries are used in the growing number of standalone solar charger units being installed in cities, for example to provide mobile phone and tablet charging facilities for the public.

Essential Reasons for having a Solar Battery

Things to know  before buying a solar battery

Solar batteries currently come in several types. Some of the technologies are:

Solar batteries carry warranties on the number of ‘cycles’ they will deliver. One cycle is defined as one complete discharge of the battery (using it until its store of electricity is empty) followed by a full recharge. In practice, a solar battery is most likely to normally be partially discharged then recharged, rather than get fully discharged each time. The range of lifetimes for leading solar batteries varies significantly, but will be in the thousands of cycles, say between 2,000-10,000 cycles (although solar battery technology is improving constantly and at a fast rate).

In a similar fashion, solar batteries come in a variety of capacity ratings, which refers to the maximum amount of electricity they can hold at any one time. Current batteries range from just over 1 kilowatt (kw) to 10kw. However, an important distinction to be aware of is the vital difference between maximum capacity and ‘usable’ capacity. This is because a solar battery should never be drained completely. Therefore, it is important to know whether a solar battery’s stated capacity is the usable or maximum amount.

The Future for Solar Batteries

Solar batteries are already big business, and they are set to become a massive factor in the growth of solar energy in the coming years. This is because they are such a robust means of providing electricity when solar systems are not generating electricity, or even working in the background during daylight hours. As a result of maximizing the use of the power generated by solar systems, they have a pronounced effect on bringing down electricity bills and reducing dependence on public energy grids. This in turn relieves pressure on public grids, which will make it easier to meet growing electricity needs in a sustainable manner.

Did you find what you need?

Go to CONTACTS section on our website , send us an email or contacts us directly and we will endevour to get in touch with you within 24 hours
Contact us